Visit this page often for deeper information about our Deep Japan Senpai network. Stay updated here with info on their history in Japan, and what they're up to these days. You can always become a Deep Japan Senpai yourself. Sign up quick and easy here.

Max Ninomiya is a very relaxed and knowledgeable entrepreneur. He is a part of the Entrepreneur Group for Growing Japan (EGG Japan), and works right in the heart of Tokyo, just outside Tokyo station. This group focuses on business strategy for Tokyo based companies, and just so happens to be rooted in the Marunouchi district, arguably the most corporate dense area in the world.
Here Max gives us a little view of the newly remodeled Tokyo station. It was nice talking with him about the remodeling, as well as getting insight about the surrounding buildings, and their significance in the history of Tokyo business.


Friendly and Welcoming, Jenny Sato is the Model Metropolitan Senpai

When you think of an international resident mom, and member of the international community, Jenny Sato should come to mind. She is originally from China, and did her education in Singapore, but just a short time talking with her, you'll know she was made for Tokyo. Having lived in Japan for nearly 8 years married to her Japanese husband, Jenny is a fashionable and plugged in expat woman with the network to prove it. She and many she knows are part of the "Yokohama Mamas" friend community, and if you have any questions about living and enjoying yourself in Japan, Jenny is the one to ask.

Fast-paced, fashionable, and enthusiastic, even something as simple as enjoying a cup of coffee with Jenny will turn into a fun and dynamic conversation. She always has a story to tell, so we're more than happy to have her on board as a Deep Japan senpai, because when it comes to luxurious Tokyo living, there's not much she doesn't know.

Shinji Kawahara hails from the small prefecture of Toyama on the northern coast of Japan. Coming from a somewhat rural upbringing, Shinji has made his way in the big city, and appreciates the stimulating and lively business atmosphere. Shinji is no stranger to being in foreign countries, as he is an avid traveler, and is currently employed by a Spain-based materials company which requires him to be in Spain for business often.

Shinji is a valuable Deep Japan Senpai for his strategic views and approach to making knowledge about Japan and Japanese culture more accessible to visitors. He understands that Deep Japan is a great avenue for exploring Japanese culture inside and out. His contributions to the site will help him answer questions he has received in the past such as "Why do Japanese people celebrate Christmas", or "Why do Japanese people have American -style weddings?". Deep Japan seeks to answer these questions along with reflecting that cultural knowledge in concrete travel suggestions.

One unique suggestion that Shinji made was to utilize Japan's growing elderly population as a source of deep cultural information. Elderly people living in the Tokyo area tend to be more fast paced than those in the countryside, and thus have contributions to make to the foreign visitors seeking a dynamic experience in Tokyo and otherwise. Shinji is full of good ideas, and here he shows us the key bus station near Shinjuku station, from which a huge selection of unique Japanese areas awaits. And he mentions you can get to the 5th station of Mt. Fuji for just 30 bucks here! And there are many buses a day!


Event with much Senpai Participation

Many members of the Deep Japan team, as well as many of our Senpais participated in this year's ACCJ Charity walk-a-thon.

Our valued Senpai, Steve Burson, who is also the president of H&R Group, was instrumental in making this year's event a great success. H&R Group is also involved in a number of other charitable efforts, representing the drive from the expat community to give back to this country we have come to love and call home.

The main attraction this year was the visit we had by the 501st Legion, Japan Garrison, a group of Star Wars costumers who always brighten an event with their novel presence. This was certainly a unique event, filled with people in full support of Japan.

Midori, or Mido for short, is a Gold Senpai filled with enthusiasm, and always finds herself in a helping role. She has a knack for bringing energy to a social event or party, and loves to make sure that everyone is comfortable and having a good time. Midori was born and raised by her Japanese family in Mexico City, where she was educated bilingually in Spanish and Japanese until she at long last came to Japan when she was 18 to pursue a degree at Sophia University in Tokyo. After University, Midori felt the desire to acquire a skill which could allow her to travel, so she sought a Japanese teaching license. Soon after she received her credentials however, she joined the company Space Design, which caters to business travelers with serviced apartments in the Tokyo area. Midori was hired for her excellent people skills, language ability, and empowering attitude.


Space Design fills a unique role in city life for foreign visitors. One of the most headache inducing processes in Tokyo can be successfully moving into an apartment. Hence this is never usually an option for short term extended business stays. Space Design however simplifies the whole process and provides conveniently located, fully serviced apartments in Tokyo with a very up-front process much like a hotel in which you just pay by the day. This company represents an increasingly accessible and approachable Japan, and Midori emulates this concept with her supportive personality, and eagerness to share Japan with the world.


According to Midori, the clientele of Space Design has shifted from about 10 years ago from mostly very high ranking executives to a broader range including families, students, and a host of other corporate positions. The diversity of foreign visitors in general is growing, and Midori is confident that they will come to love Japan. The Deep Japan project is lucky to have her on board, as the subtle tips and tricks, supportive attitude, and enthusiasm Senpais like Mido have to offer will be the keys to making a Japan trip an unforgettable one.

Organized and Resourceful, Keiji Yumiyama has a wealth of Native Knowledge and International Experience.
https://www.facebook.com/profile.php?id=100000407358866&fref=ts


Keiji Yumiyama is an intelligent and personable businessman who currently makes use of his networking abilities and honest desire to better the Japanese business landscape as the managing director of the HRM Association, which he himself founded in April of 2010. Keiji's efforts to inspire and collaborate with small and medium companies parallel his desire to express to the world the positive and unique things Japan has to offer as a Deep Japan Senpai. In fact, one of the primary goals of the HRM Association is to broaden perspectives of Japanese entrepreneurs and inspire bold, progressive endeavors into international markets.

Hailing from what he describes as a merchant city, Keiji Yumiyama brings from Osaka, Japan a natural and cunning business sense he developed from an elementary school age. His family managed a very prolific fruit stand, which Keiji assisted with during his breaks from school, and it was there that he learned the fundamentals of interacting with others in a buyer/seller, client/company relationship. During his studies at Osaka University of Foreign Studies, he spent one year abroad at the University of South Florida. Upon his return to Japan, he graduated in Osaka and quickly entered the Sharp Corporation as a sales person.

After a brief job change to a director of a trading company, Keiji then further developed his business abilities at the Thunderbird School of Global Management in Arizona, as his second tropical destination of study in the U.S. After earning his MBA there, he has since spent his time in Tokyo making use of his extensive business knowledge, to eventually become a facilitator of business as the founder of the HRM Association. His knowledge of Japan and the Japanese spirit is extensive, and the Deep Japan project is overwhelmingly fortunate to have Mr. Yumiyama's wealth of historical and cultural knowledge on board.

Keiji stays active in his free time through swimming and other activities, and also spends time playing soccer with his two sons, who are avid players. Here, Keiji was nice enough to write in teh Japanese style of caligraphy a very deep and meaningful Japanese expression. "Ichi-go, Ichi-eh" translates roughly to "Each encounter may be a fated one, so treat it as a valuable experience". You will find in Japan that people are very hospitable, and will certainly value a chance to meet and speak with you! 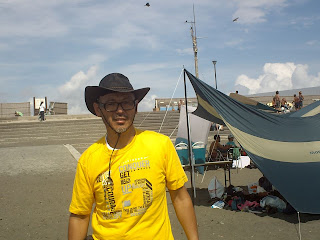 Active, enthusiastic, and knowledgeable are words that describe Mr. Mike Kato. Originally from Los Angeles, California, Mike is a 3rd generation Japanese American who has been living and working in Tokyo, Japan for over 25 years. Mike is an avid sportsman who is always on a search for greater knowledge of and connectedness with his surroundings, and passes this message on to his two sons who have grown up in Japan. You can count on Mike to always be getting involved in something that combines activity and learning to make a fulfilling experience for everyone involved.


After graduating from the University of California at Santa Cruz with an independent major in Future Studies (1985), Mike originally came to Japan in 1987.  After stints as an English teacher, he worked as a project coordinator for ALC, still one of Japan’s largest language education firms that focuses on various aspects of international education and business. He has since been involved in various fields of work from language consultation to IT development, yet has always directed his work toward greater goals of socially sustainable communities with a healthy dose of fun.

Over the past few years, Mike has focused his efforts on the international potential of SMEs, particularly after the 3.11 Earthquake and Nuclear Disaster.  Last year, he worked as curator for re:new Tohoku, a CoolJapan event held in London.  This year, he has been working on projects to promote and sell Japanese technologies and products in Southeast Asia and the Middle East.

Mike is a great model Senpai who has not only extensive knowledge on experiencing and enjoying the ins and outs of Japan, but is also eager to share this information with the world. To him, learning as an activity forms the basis of life, and he is always on the lookout for interesting opportunities to have fun and help people. In fact, Mike has been active in Japan for Livestrong, a local network associated with the Livestrong Foundation in the US that raises awareness and provides support for the local cancer survivor community.